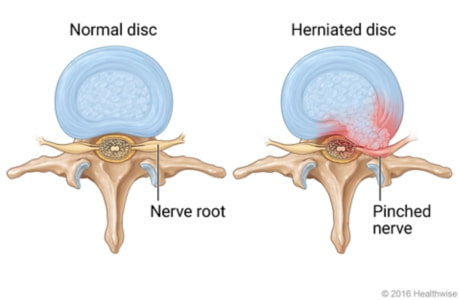 This is a classic image of a posterolateral disc herniation that is placing direct pressure on the nerve. This usually results in radicular symptoms (i.e. sciatica).
Dr. St.Thomas employs techniques that have are highly effective in helping to diagnose whether or not a mechanical (non-invasive) solution can help resolve the herniation and prevent invasive procedures (injections or surgery). Fortunately, when the assessment reveals that there are specific movements that help to reduce and eliminate the symptoms - then we are able to simultaneously diagnose and educate the patient on what their therapy is and why they should be using it. This active form of collaboration drives better results with enhanced clarity of what other rehab exercises should be incorporated.

What are "discs" and what is their purpose?

The discs in our spine act as shock absorbers to help the spinal joints articulate to allow us to move in all directions (i.e. flex forwards, extend backwards, twist/rotate left and right, laterally bend side-to-side). Over time the discs can age in an irregular manner, which can lead to weakening of the fibers and rapid aging when compared to other segments. This aging process alters the structure and in turn, has an effect on the functionality, inflammation and predisposition to pain.

The classic explanation of a disc is often described as the "jelly inside the donut." However, the disc material is closer to that of "fresh cement" when it is first poured out of the cement mixer - a material that is thick, strong and malleable.  This is important because the discs must be strong enough to withstand repetitive pressure and stress in all directions - after all, they are designed to be shock absorbers. However, when the discs absorb force from primarily one direction (i.e. sitting at work all day, then sitting on a couch with bad posture, and favoring flexion based exercise as the primary means of movement) the result is the jelly in the donut gets pushed in one direction over and over and over again. If this process does not receive the simple balance it needs, then eventually the discs will herniate in some way shape or form.

One of the most common stories that seems ubiquitous across all parts of the world is the colloquial "I threw out my back," story. When that particular individual is asked what they think caused the episode, the answer is typically something along the lines of, "I barely did anything!" For instance, they may describe picking up something light off of the floor, or standing up after being bent forward, or gardening for long periods of time, etc. These situations are what seem to have "caused" the herniation, when in reality, the structure has been changing for a long time.

Even though it can happen suddenly, it is the cumulative effect of day after day, month after month, year after year that creates the herniation. This consistent pressure on the ligament that holds the "jelly in the donut," fuels the rearrangement of fibers to learn that the concept of moving in all directions was normal. However, if there is only one direction of stress on the discs, then they will no longer have the ability to be flexible in all directions. Constant pressure on the ligament wears down the durability and accelerates the aging process, which is a process often referred to as degenerative disc disease (DDD). This is why disc herniations and degenerative disc disease often influence each other. The more segments there are in the spine with herniations tends to imply the faster the degenerative process will occur.

Once the herniation has had time to form, the stage is set for an episode that will often be described as a "symptomatic herniation." There are people that end up obtaining special imaging (such as an MRI or CT scan) to evaluate potential pathology, which is not uncommon for them to find out that they have disc herniations - but do not display any characteristic traits of "herniated discs (pain, neurological deficits, change to quality of movements).

If you or someone you know experiences multiple episodes similar to this per year, then you are likely experiencing or witnessing the same herniation over and over again. With each episode, the aging process continues to accelerate especially when the habits that seem normal (sitting all day, sitting with poor posture, repetitive exercise in the same direction) do not change.

What can I do to fix this problem?
Finding a professional to properly assess and treat the area is step one. Part of step one is retraining the movement in all directions, which tends to have healthy and positive side effects such as improved range of motion, decreased pain signaling and reduction in future episodes. However, once the degenerative process has begun, it is unlikely that it will reverse. However, stopping the process or dramatically slowing it down will have incredibly positive outcomes in your treatment plan. That is still true even in a situation where herniations and degeneration has increased to the point of needing a surgical consult.

What are the options to conservative care? How do I know if I need surgery?
Neurological deficits are the hallmark figure to determine whether or not a surgical route should be considered. If there is a motor deficit that progressively worsens over a short period of time, then it will be up to a surgeon to determine whether it is necessary to implement an invasive method. More often than not, an injection will be the first line of invasive methods (usually an epidural) to see if surgery can be avoided.

In any case, specialized imaging will be obtained prior to any invasive procedures and often times may be warranted to ensure that conservative care is being accurately directed.